Idli and White Dhokla both use similar ingredients, and what I learnt from my visit in India is how to combine the two and make quick Khatta Sandwich Dhokla! India has the luxury of expertise available at comparatively low costs with quite creative talent. The chefs in India who come to cook, probably cover 10-12 kitchens prep and cooking through the day. So they definitely know how to finesse their task and make things work faster for them. One such trick was shared by one such creative chef who comes to our house. Knowing my passion for food and cooking, she suggested I should definitely try her Khatta Sandwich Dhokla from Idli batter. I was so impressed by the outcome, I had to try out this quick, one more easy way of making Dhoklas.

My first challenge was getting the fresh Idli batter in USA, especially when one is living in an area without high concentration of Indians. So decided to try the next best thing, which was the ready Idli Batter available at the grocery stores, viz Shreeji’s Idli Batter. Various other brands are also available, but I did not have much luck with them. Maybe the stock was old, or not well fermented.

After persisting a bit more, was able to arrive at the right consistency and softness in the texture for the Khatta Sandwich Dhokla, What worked was diluting the mixture a bit, and adding a pinch of bicarbonate soda. In a Gujarati household, fresh green chutney is a staple and hence always have a stock of it at home. And adding a layer of this chutney in between, gives it a kick as well as the color. You can even not garnish it, and have them plain, if you are watching calories, and you will find them tasty as well.

Dhokla as people now know it, is actually known as Khaman (Yellow Dhokla) in Gujarat, on which I have blogged earlier Khaman Dhokla from Instant Mix  .The real Dhoklas are the Khatta or White Dhoklas. So enjoy one more version of Dhokla and keep this recipe in mind, if you have left over Idli Batter to fix some snack during the day or for a quick bite in the evening, or just have it for dinner, as a friend of mine did! She tried with fresh Idli batter! Any guess her state of residence? NJ 🙂

Hers came out soft and fluffy without any additions or alterations of the batter dough! Hope you enjoy this quick version of Khatta Sandwich Dhokla especially with the Diwali festivities on the way! 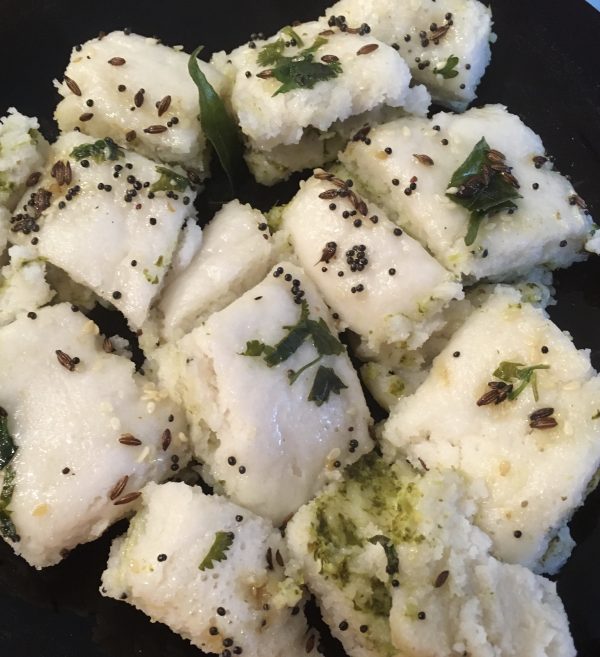 You can also add ginger chillies paste in the mix to make it more spicier.

When the dhokla  leaves the edges of the thali/platter,  it indicates that it is nicely cooked. Other way of checking is to insert a knife/fork and check for the firmness/cooking of the batter.

If you want to try an instant mix variation, check out another post on  Khaman Dhokla Instant Mix Recipe

Persistence and instinct plays a great role in getting things right!

You can variate different types of chutneys for exploring different flavors. I might do with Guacamole filling to try something new with a twist!

For a Gujarati household, another way of  making  Dhoklas  is always appealing and I have the chef back in India to thank for! The texture is soft and the layer of chutney makes it interesting and spicy. I cannot wait to explore this with the fresh homemade idli batter and am positive that will turn out even more fluffier and tastier! Morning breakfast got a new item on the menu! Plan to post the instant mix recipe of White Dhokla soon too, as this has been my way of making quick dependable tasty Dhoklas for all these years! Enjoy the upcoming festivities of Diwali with delicious foods of all kinds! 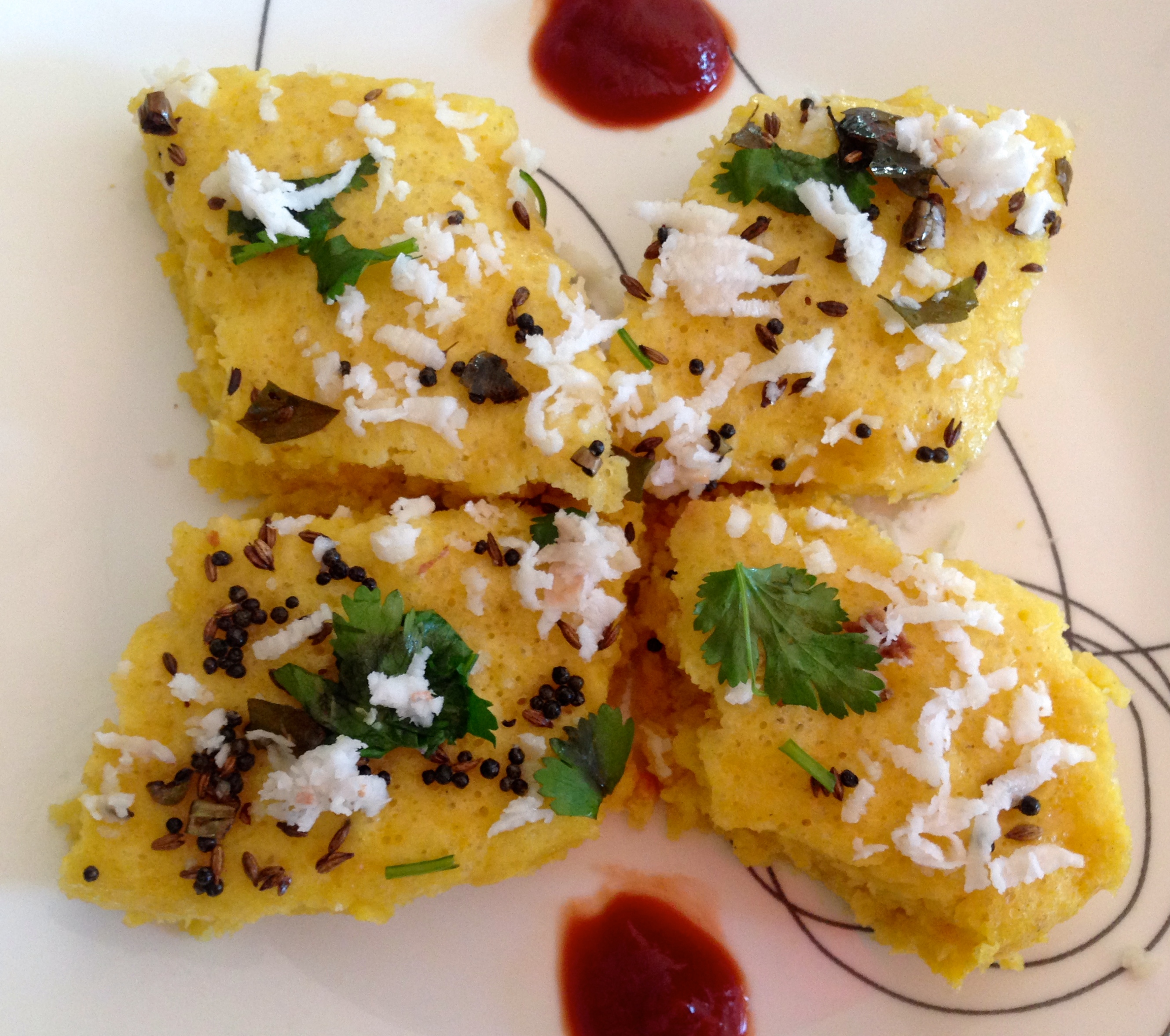 People in India and  around the world  are filled with curiosity about Mr. Narendra Modi, India’s Prime Minister elect, on account of the sweeping victory claimed by him and his political party. So even I decided to join the club and do some more research about him, to know more about him as a person. Food being my passion, any information related to that sparked my interest. I came across this NDTV weblink on the top 5 favourite food of Mr. Narendra Modi at http://cooks.ndtv.com/article/show/narendra-modi-s-top-5-favourite-foods-525352. Needless to say they are all from Gujarati cuisine- Khili Khichadi, Khandvi, Dhiokla, Mango Chhundo( Chutney) and  Badam Pista Shrikand.

The state of Gujarat has something in its soil , for it is  the state from where stalwarts like  Mahatma Gandhi,  Sardar Vallabhbhai Patel, JInnah, and now Narendra Modi to have risen to  political ranks of the country. Besides these, Gujarat has also been the state from where business man  Dhirubhai Ambani and the Patriarch JRD Tata have originated. And the foodie in me, will want to also say , that, there must be also something in what you eat that makes you rise to top!!

Taking a cue from Mr.Modi’s five favorite foods, I am glad to share the recipe of instant khaman dhokla gram lentil  steamed cake using Instant Mix. I have found  this to be very easy, consistent and tastes delicious. This is often a breakfast item in our home , and is easily cooked in 15-20 min. There are many different brands of instant packs available, of which this is definitely very reliable and  we have been using this for almost past ten years or so.

The khaman dhokla gram lentil steamed cake is soft, spongy, with a nice spicy garnish in the top. This is known for its sponginess hence, the comparison to a cake! And the good part of this is, if it does not turn out well, just crumble it and make it a Khaman mix with garnishes! So it is very forgiving dish for a new person trying it out. This is so popular that Gits has come with two varieties Khaman and Nylon Khaman. I prefer the Khaman Dhokla Mix.

The garnish on the Khaman Dhokla Gram Lentil Steamed cake could be red chilli powder, black pepper or even powdered roasted cumin seeds.  Recipe of Khandvi , another delicacy enjoyed by Mr. Modi,  can be found on this  blog at http://cookingbyinstinct.com/khandvi-bengal-gram-rolls/

I am sure we will be seeing a lot of Khaman Dhokla Gram Lentil Steamed cake and Tea at Prime Ministerial State breakfast and that is something  international dignitaries will get a good share of!!  Seeing its well acceptance and appreciation   by m  international friends and my daughter’s classmates, Khaman Dhoklas are going to be very much in demand now!

The trick to softness , lies in the vigorous stirring of the mix. 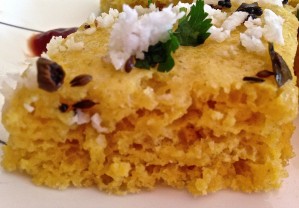 If it does not turn out well, crumble the cooked dhokla and mix in the oil garnish as well corainder and coconut. Add an extra layer of sev ( thin gram noodles )  and serve.

Check if the dhokla is cooked by inserting a fort/knife to see that it is not  liquidy in the middle.

Soft and yummy, spicy and colorful, healthy and nutritious , and soon to be a popular on an international level! A very healthy breakfast, appetizer that can be enjoyed with ketchup or green chutney. 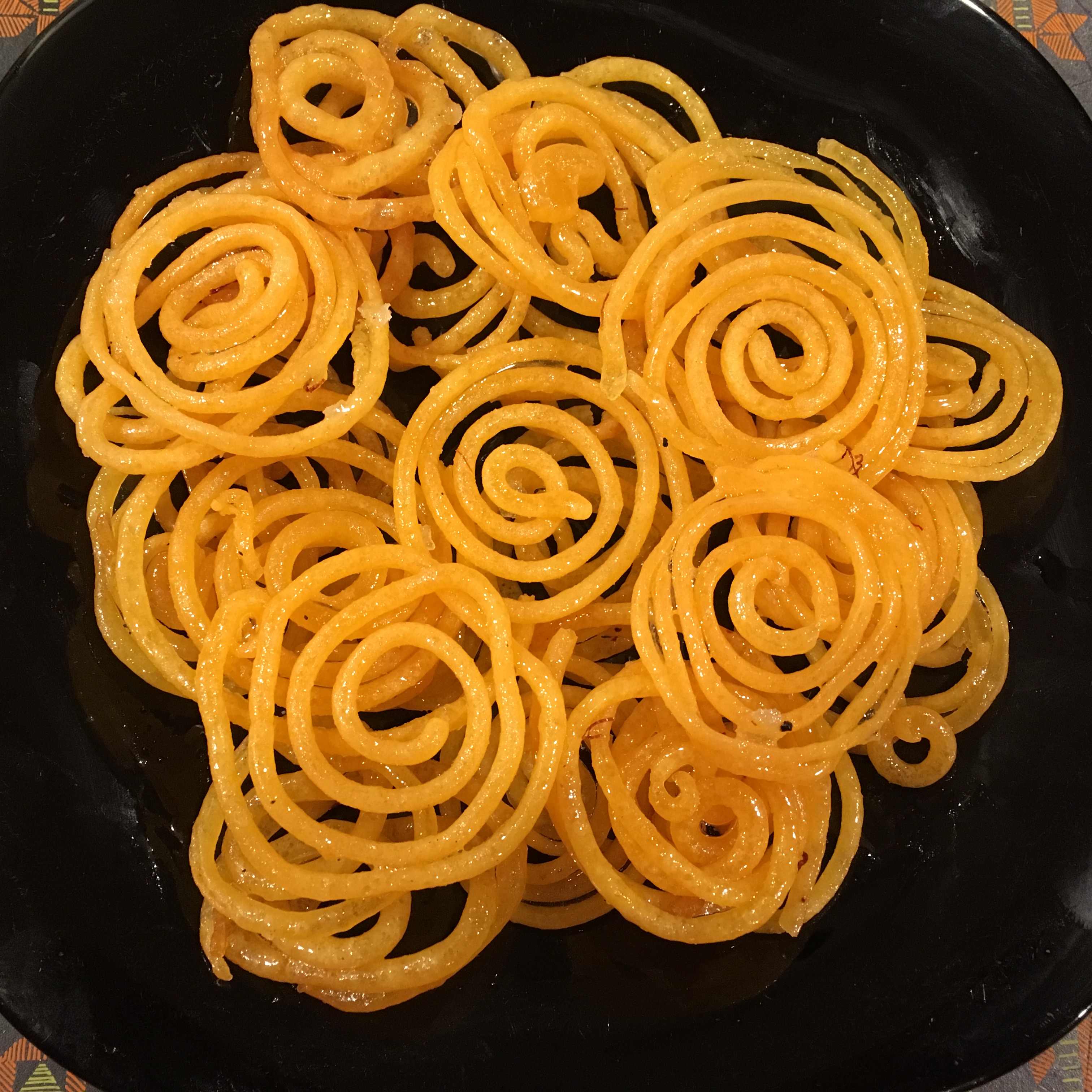 Jalebi Spiral Doughnut, also popularly recognized as the national sweet of India, has its earliest reference in India, in a Jain manuscript Priyamkarnrpakatha written by Jinasura in 1450 AD, The traditional name for Jalebi was Jal-Vallika meaning “dipped in water”, which in later dialects in India became Jalebi, Jalepi , Jilabi and so on.  In Sanskrit it was also alternatively known as Kundalika, which means coiled rope, circle, which is how the shape of this jalebi spiral doughnut. Personally, it reminds me of two things, one is the ripple effect of stone thrown in water, and secondly it reminds me of the countless galaxies that exist in our universe! It so nice to see nature reflected in our daily food and day to day activities!!

The current recipe for making Jalebi, is still very similar to what has been documented in 17th-century classic Bhojan-kutuhala by Raghunath. All these evidences clearly give more weight to the theory that this is an Indian Sweet as compared to some claims that it originated from Persia, where it was known as Zelbia or Zoolabiya. The Persian trade route would have definitely made the travelers excited in their talks about this aphrodasiac dessert which is prominent dessert at weddings and also for major national celebrations and holidays. The fact that Jalebi it was mentioned in the manuscript with the name Priyam, makes me think it was aptly made by the rich merchants to please their guests! And boy it pleases so many across the world, as it is found in India, Pakistan, Bangladesh, Persia, Iran, Africa, Egypt, Turkey, and even Israel. And it seems in the USA, a Syrian used it to make ice cream cones, till the current ice cream cones were made.

In Gujarat, traditional celebrations of Dusshera is done with jalebi and gathiya, and I have an extreme liking for jalebi. Hence, I had to try it out for Dusherra. So I opted to trying out the Gits Instant Jalebi Mix using a cookie decorating nozzle. The result was very satisfying as I was able to get a great shape, that held even after hours, the right texture that was crispy on the outside and soft on the inside, and the color was the shining golden! Next time I will try to use a different nozzle, so that the thickness is a bit more. I have to admire that the Gits Instant Mix are often my source for instant and reliable recipes and for which I have also blogged earlier for making Idlis, Dhoklas, Handvo and now even desserts.

Jalebi Spiral Doughnut has an enticing shape, a firm texture, inviting color and fragrance. It becomes simple to make with an instant mix, and it would be not surprising if Jalebi, can also be one of the easiest fried donut recipes. Even if the shape is not totally perfect, it does not matter, as one cannot go wrong with this fried dough dipped in saffron sugar syrup! Enjoy these lovely swirls of delicious sweetness as we get closer to the festival of Diwali!! 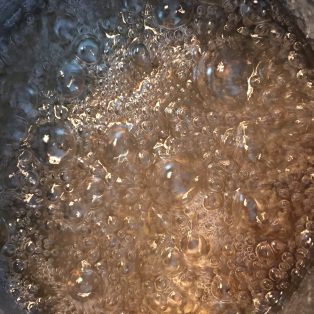 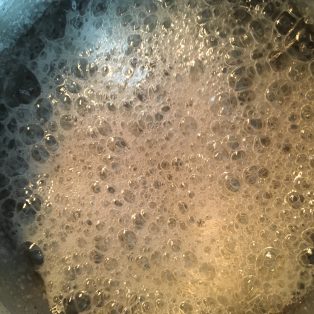 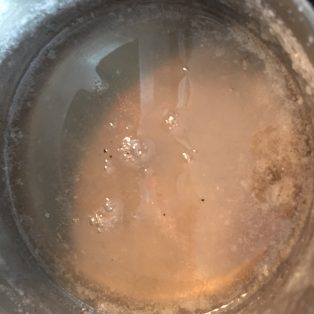 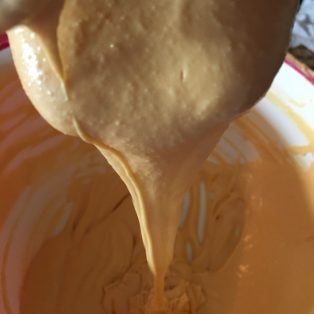 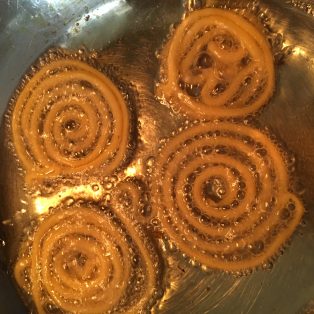 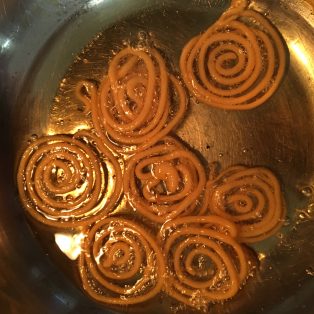 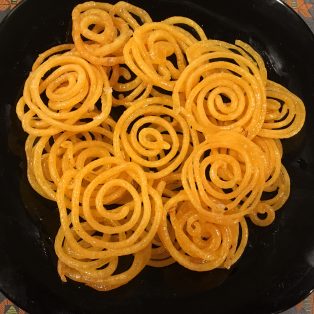 For Vegan recipes, milk can be avoided in the sugar syrup, as it is mainly used as a cleanser. To get a better control of the shape keep the nozzle close to the oil so that you can go with the flow of the rotating swirls.Do not overcook, the jalebi as that will make them brown in color and also stiff.

A delay in the transfer to sugar syrup will yield it not evenly colored, as well as it will entail crystallizing of sugar on the top. Frying in oil is more preferable to hold the texture, as compared to frying in ghee, though folks in Rajasthan and some other parts, fry only in ghee!

Using a nozzle was an instinct based, as was to figuring out how to swirl! Try topping it with cinnamon powder to create a new flavor.The sugar syrup can also have additions of rose water and cardamom powder for extra flavor.

A sense of joyful accomplishment on savoring Jalebi Spiral Doughnut, a  childhood favorite dessert of mine, specially from my hometown Rajkot, where it is savored with fafda ghatiyas. I distinctly remember watching in awe some of the kandoi making these delicious savories and snacks and in my wildest dream I did not think I will be doing this one day! The taste was great, the look was sharp and the texture was firm as I liked it!!! By making this, I surely was happy I celebrated Dusshera in its true sense and the joy of sharing these sweets with friends and family made it even better! Happy Dusherra though belated one, to all my readers!! 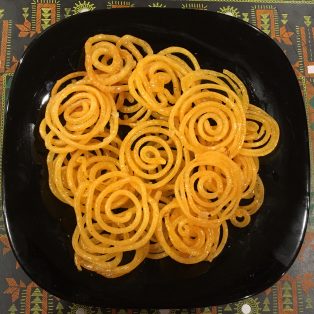