Ganesh Chaturthi, celebrating the birth of Lord Ganesh, cannot be complete without making Churma Ladoo. So I decided to try making the Healthy Churma Ladoo Jaggery Sweetballs with Wheat and Pearl Millet. Lord Ganesh is known as the harbinger of all things favorable and auspicious, and everyone welcomes him to their homes with intense devotion, worship him with sincerity and in the end, immerse or do visarjan in water. Huge idols with lot of artistry are created. Prayers are done with lot of joy and enthusiasm. Ganesh Chaturthi co-incides with Sanvatsari for Shwetamber Jains. A day after the Ganesh chaturthi, the Das Lakshan  of Digamber Jains start and culminates after 10 days. The last day of Das Lakshan and the Visarjan or Immersion of  Lord Ganesh, again co-incide on the same day. This close proximity of important festivals for  Hindu and Jain religion highlight the close evolvement of  Jain and Hindu religions. Indians believe very strongly in the rising moon’s energy to enable their tasks. In Jainism, the fifth day of the rising moon period is considered highly auspicious for obtaining the right and true knowledge, and knowledge being the central tenet of Jainism, hence all good things start on the fifth day of the rising moon, and that explains in my view, why Das Laxan starts on the fifth moon day and ends on the anant chaturdashi (14th day) near full moon day, enabling all to maximize their spiritual learning and progress, aided by the good vibrations during a rising moon period. Intermingling of rituals, religions and customs makes one think, that all religions are part of the same truth, viewed differently and having a common goal of liberation.

As a young child, my grandmother would make gor jaggery ladoo from leftover roti. Chuma ladoos which come originally from Rajasthan, were either fried in ghee or made via bati(cooked in oven) and made with sugar. Obviously the more ghee or fat, the more tasty it is going to be! But since we are going the healthy way, I resorted to cooking chapati/bhakri and added the bajri pearl millet to make it even more healthier. The crunch comes from semolina, which maybe avoided if you have bhakri atta which is a little more granular than normal wheat flour for roti.

The covering of poppy seed and added flavor of nutmeg,cardamom and cashews bring more texture , taste and color to an ordinary jaggery ladoo. By not frying it in ghee, we have reduced the fat content to half, so thats a big thumbs up for healthy alternative in this recipe.

Through this post on Healthy Churma Ladoo with Wheat and Pearl Millet, I would like to invoke the blessings of Lord Ganesh and may all good things come your way and  convey Micchami Dukkadam from my side to all Jain Shwetamber/Sthanakvasi readers of this blog! 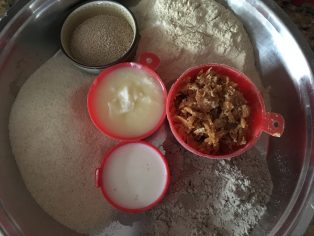 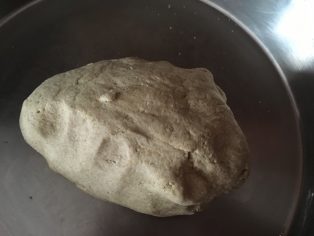 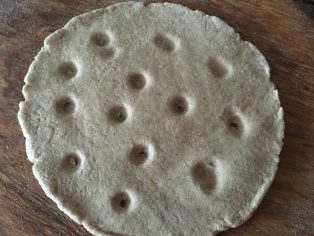 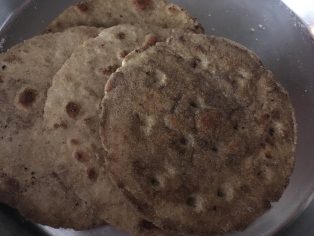 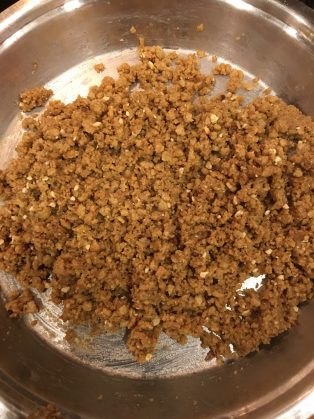 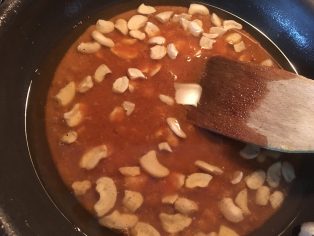 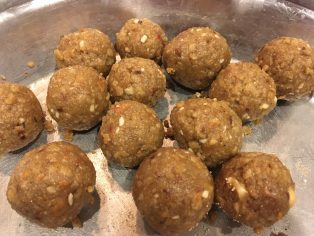 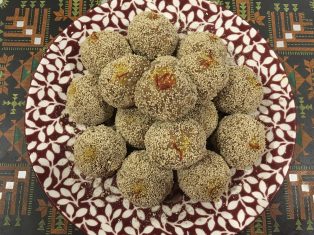 Ensure that the rotis are not too stiff after cooking , as that will leave sharp pieces and it will not not give a smooth texture. If after mixing in ghee, it still feels hard, just do another round in food processor, till it reaches the fine texture. Do taste the sweetness before making them into ladoos.

If not using semolina, you can make it like roti and crush into finer pieces, this will make it more softer.

If finding it difficult to gather into a ball, add some more ghee as required.

Combining the wheat and pearl millet was instinct based, as this is how my mother eats bajri no rotlo at home. And the need was there to consume bajri on a regular basis.

When you mix the ghee, you should be able to able to gather it firmly into a ball using your fist. It might need some pressure and 2-3 rounds of going over the ladoos to get the texture right.

If you want to kick it up, hide some pennies and dime, for little kids to get attracted to eating these churma ladoos!

Memory of my maternal grand mother allaying my feeling of being separated from my mom, even  for a short while. through this mouth watering churma ladoos , which she used to make from leftover chapatis. And I would instantly be all calm and happy! Re living those moments with a healthier version of the same. Healthy Churma Ladoo Jaggery Sweetballs with Wheat and Pearl Millet are  attractive and I enjoy the saffron and nutmeg flavor in this mix along with jaggery.  Not to mention that I am significantly less guilty of eating this quintessential Ganesh Chaturthi dessert! A great way to intake pearl millet, jaggery, ghee , nutmeg, all appropriate things for the incoming fall and winter! For a devotee, Lord appears in all places, so it seemed to me in this pic of Healthy Churma Ladoo Jaggery Sweetballs with Wheat and Pearl Millet, Ganpati Bapa Morya!! 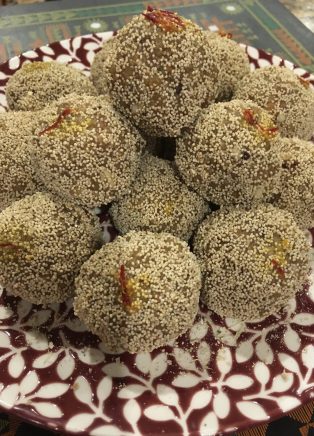