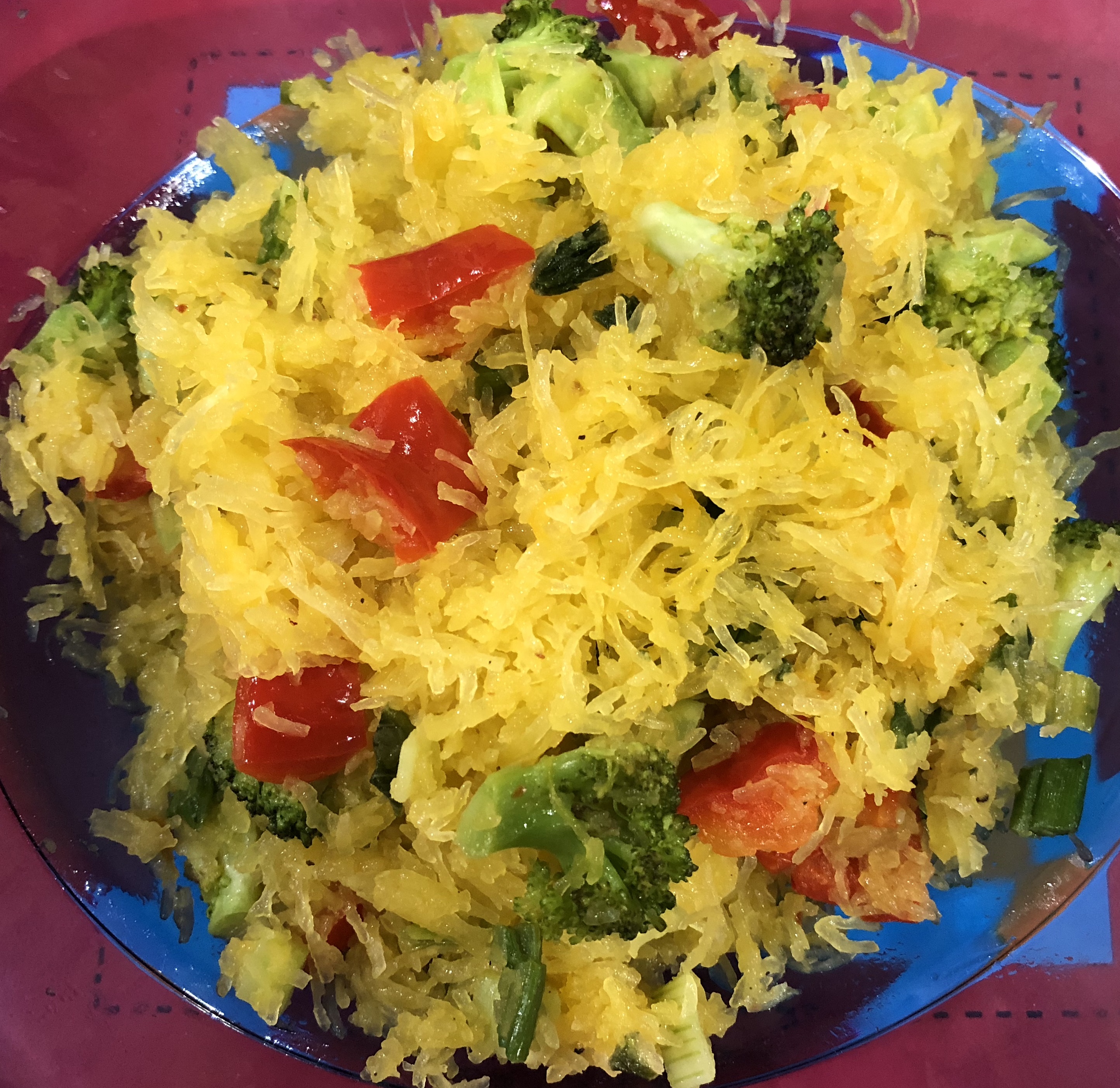 Spaghetti Squash is a fall vegetable that is in the shape of a nice yellow oval. I first had this in an upscale restaurant in  Williamsburg ,VA. When I ordered this item from the menu, I thought I am going to get the spaghetti with squash vegetable. Little did I know that the spaghetti squash was a vegetable by itself and that on cooking, its strands come out like thin spaghetti! When my order arrived, it sure looked like a gourmet dish and I was instantly attracted to its thin strands. That day, I decided I have to learn how to make Spaghetti Squash. Now that the Fall season is in full swing, lots of squash varieties are easily available.

The challenge that one faces with spaghetti squash is the process of cutting into half as the exterior is pretty thick. To overcome this challenge, I resorted to finding an easy way of cutting squash, and came across an extremely useful link. Read more about it at https://www.teaspoonofspice.com/easily-cut-spaghetti-squash-spaghetti-squash-lasagna/

Spaghetti Squash contains fibers that when cooked, converts into thin strands. Hence the method of using microwave for couple of minutes before cutting and then halving it followed by baking it for an hour, releases the strands easily. This winter squash is quite tasteless, as such hence can be used in variety of ways. Mostly people use it as a spaghetti substitute, as if offers only 42 calories per cup of spaghetti squash,probably the lowest among all winter squashes. It is very rich in Vitamin B, Potassium and Magnesium and has a very high content of water.Hence it very useful for weight loss as well as for people suffering from hypertension and Vitamin B.deficiency.

The version presented here, has some more personal touch to it in terms of green chillies, olive oil, black pepper, green onion, broccoli and a hint of red bell pepper. Enjoy this unique gift of nature, that has so many benefits! Spaghetti Squash is so pretty in color, and the texture definitely wins more points as compared to other things in this lovely Fall dish! 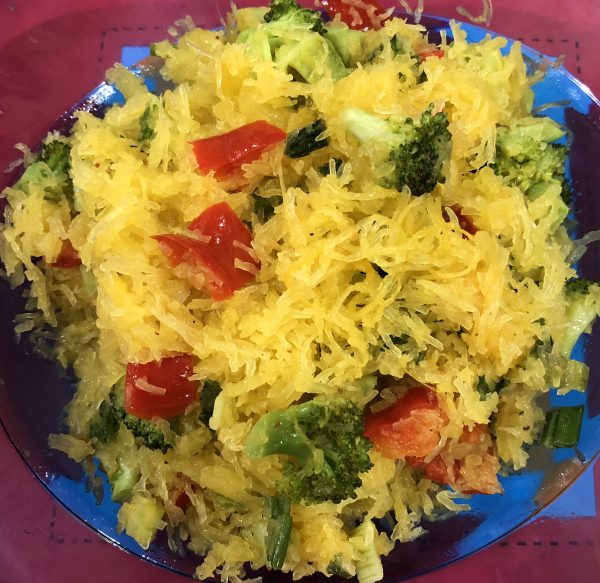 One more tool that can be used to cut easily is to poke toothpick all around and which will assist and guide you in cutting the squash easily and in proportion. A dash of lime and ginger may also taste good with this.

Felt triumphant on being able to cut the spaghetti squash with just the knife, as came across the pre- heating in microwave recipe later! It was mesmerizing to see the strands come out of the starch in the spaghetti squash, almost like a magic trick! Some spice of black pepper, green chillies, green onions and broccoli gave it a flavor of Pad Thai noodles, giving the spaghetti squash and exciting flavor. Its healthy, its light, its flavorful, its colorful and it is common sense to eat fall colored vegetables in fall season! Thoroughly enjoyed exploring, cooking, and tasting this exotic looking vegetable dish with a highly popular pasta name! 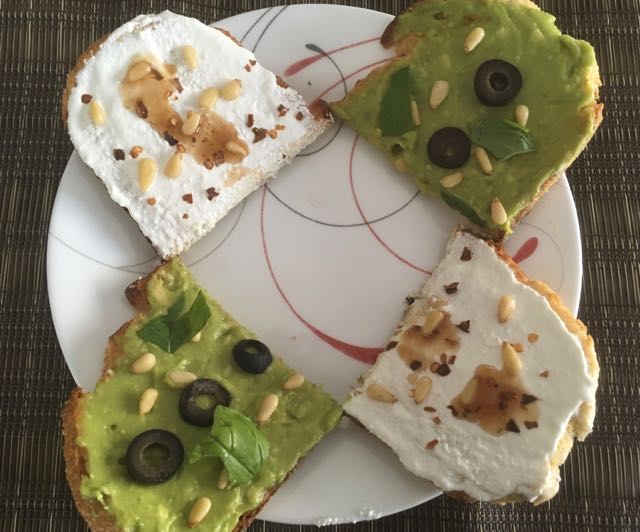 Avocado and Cottage Cheese Toasts are recipes from a French  grandmother,  that I chanced upon on my trip to New Orleans last month. We have been making trips across the states, to visit different colleges, and so a few places are some that we have never visited. Like every tourist, I had a few museums in mind , besides visiting the famous French Quarters and a tram ride on Charles Street. New Orleans was earlier a French Colony as well as Spanish colony. And then it was purchased by USA from them in the famous Louisiana purchase, The city has retained its french legacy with the streets in the french quarter still retaining fresh names.

I have always found vegetarian food in french cuisine to be highly delicious, flavorful and healthy  per my experience in Paris. So when I got a chance to try some in the cafe at Contemporary Arts Center, I was eagerly waiting to be pleasantly satisfied and also surprised by its flavors. Rightly so, I found a highly colorful and varied combinations to eat a simple toast!! No wonder the french toast is also so popular. A brief reading on Wiki mentions that the french toast was earlier dipped in milk, cinnamon and butter and that the initial recipe had no eggs, as so commonly done now. This is mentioned in  Apicius a collection of Roman cookery recipes, usually thought to have been compiled in the late 4th or early 5th century AD.

What a treat it was to taste ancestral recipes like the Avocado and Cottage Cheese Toast s in a town that is so rich with history and where French, Spanish and American influences merge to make a vibrant impression on the town and its tourists! The garnishes and spread were varied and I hope to explore more of those in future and share the same with everyone, This is a great recipe for a quick healthy colorful fix, or if someone is just watching the calorie intake and yet craves for something delicious!  Below is my first attempt to post a recipe with a  short video in addition to the detailed steps so do have a look:) 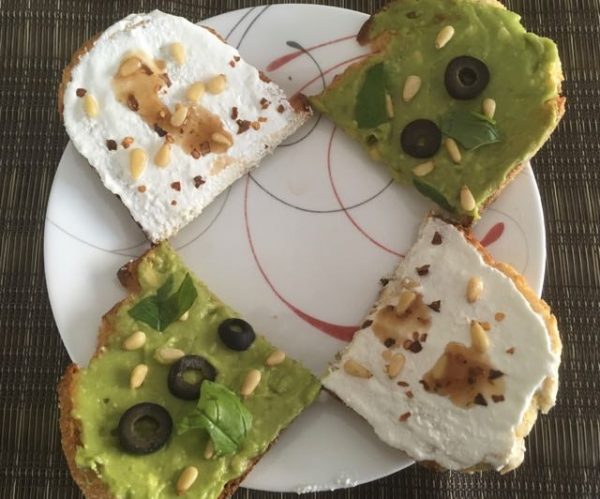 Thick slice of bread will give a nice crunch and base for the toast.  When I first tried, I had it on rye bread.

When I mashed the avocado, the color became slightly yellow, and was not as green as I saw at the cafe, So thought of adding the extra virgin olive oil and immediately the color became greener and the texture of the spread became smoother too, after all, avocado is used as a butter so worked out well.

Experiment with any toppings such as  arugula, goat cheese, walnuts to name a few!

The best lunch for a hot afternoon, as both the combinations provide a cooling and soothing effect! I have always been a fan of crunchy stuff and toasts too, so its a perfect bite with a soup on the side. It looks so colorful and inviting and can be fixed in ten minutes! Besides it is so very healthy and light that an extra piece of toast will satisfy that extra bit of craving without much guilt!  The balsamic vinegar gives a nice sweet and tangy taste which matches well with red chili flakes. And fresh basil leaves with olives for an avocado lover is always an added bonus!  Avocado and Cottage Cheese Toast is good recipe for college bound kids too, to fix something in a jiffy! Enjoy these toast recipes  from a French home in New Orleans adding refreshing flavors to the vegetarian cuisine.